"The Island of Sri Lanka is a small universe containing as many variations of culture, scenery and climate as some countries a dozen times her size.. Every point on the island can be reached with just a few hours travel by car, enabling even the short-term visitor to experience many of island's diversities."
—Arthur C. Clarke.

We organize most interesting tours to Sri Lanka. Join with us to visit the most interesting, ancient and eye catching places. An unforgettable experience to carry out through your whole life. Send us an email or call us for more details or arranging a tour.

Temple of the Tooth Relic 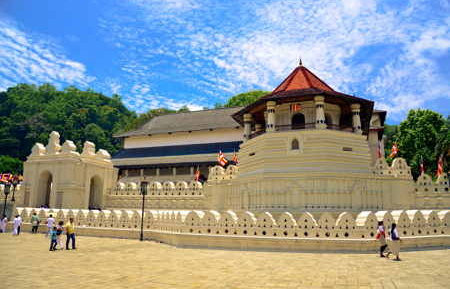 The Temple of the Sacred Tooth Relic or Sri Dalada Maligawa is a Buddhist temple in the city of Kandy, Sri Lanka. It is located in the royal palace complex which houses the Relic of the tooth of Buddha. Since ancient times, the relic has played an important role in local politics because it is believed that whoever holds the relic holds the governance of the country. Kandy was the last capital of the Sinhalese kings and is a UNESCO world heritage site partly due to the temple.

Monks of the two chapters of Malwatte and Asgiriya conduct daily worship in the inner chamber of the temple. Rituals are performed three times daily: at dawn, at noon and in the evening. On Wednesdays there is a symbolic bathing of the Sacred Relic with an herbal preparation made from scented water and fragrant flowers, called Nanumura Mangallaya. This holy water is believed to contain healing powers and is distributed among those present. -More 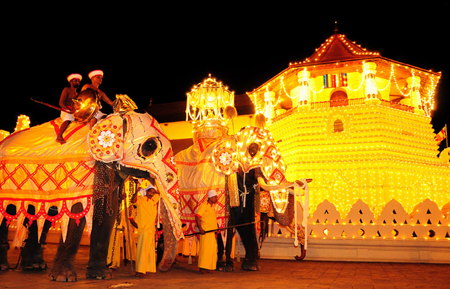 (In the month of August). The Kandy Esala Perahera (the Sri Dalada Perahara procession of Kandy) also known as The Festival of the Tooth is a grand festival celebrated with elegant costumes and is held in July and August in Kandy, Sri Lanka. This historical procession is held annually to pay homage to the Sacred Tooth Relic of Lord Buddha, which is housed at the Sri Dalada Maligawa in Kandy. A unique symbol of Sri Lanka, the procession consists of many traditional local dances such as fire-dances, whip-dances, Kandyan dances and various other cultural dances, in addition to the elephants who are usually adorned with lavish garments. The festival ends with the traditional diya-kepeema ritual, a water cutting ceremony which is held at the Mahaweli River at Getambe, Kandy. -More 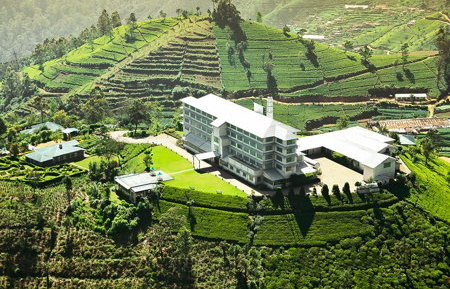 Tea production in Sri Lanka, formerly Ceylon, is of high importance to the Sri Lankan economy and the world market. The country is the world's fourth largest producer of tea and the industry is one of the country's main sources of foreign exchange and a significant source of income for laborers, with tea accounting for 15% of the GDP, generating roughly $700 million annually. In 1995 Sri Lanka was the world's leading exporter of tea, (rather than producer) with 23% of the total world export, but it has since been surpassed by Kenya. The tea sector employs, directly or indirectly over 1 million people in Sri Lanka, and in 1995 directly employed 215,338 on tea plantations and estates. The humidity, cool temperatures, and rainfall in the country's central highlands provide a climate that favors the production of high quality tea. The industry was introduced to the country in 1867 by James Taylor, the British planter who arrived in 1852. -More 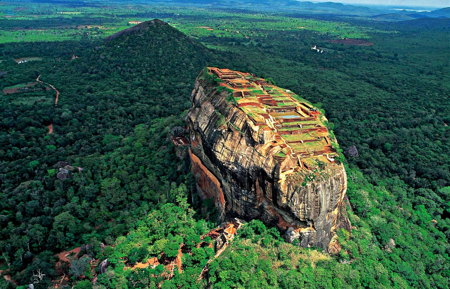 Sigiriya (Lion's rock) is an ancient rock fortress and palace ruin situated in the central Matale District of Sri Lanka, surrounded by the remains of an extensive network of gardens, reservoirs, and other structures. A popular tourist destination, Sigiriya is also renowned for its ancient paintings (Frescos), which are reminiscent of the Ajanta Caves of India. It is one of the seven World Heritage Sites of Sri Lanka.

Sigiriya may have been inhabited through prehistoric times. It was used as a rock-shelter mountain monastery from about the 5th century BC, with caves prepared and donated by devotees to the Buddhist Sangha. According to the chronicles as Mahavamsa the entire complex was built by King Kashyapa (AD 477 - 495), and after the king's death, it was used as a Buddhist monastery until 14th century.

The Sigiri inscriptions were deciphered by the archaeologist Senarath Paranavithana in his renowned two-volume work, published by Cambridge, Sigiri Graffiti and also Story of Sigiriya. -More 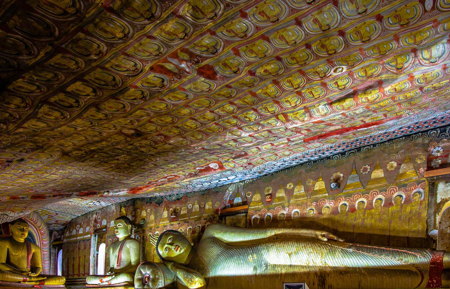 Dambulla cave temple also known as the Golden Temple of Dambulla is a World Heritage Site (1991) in Sri Lanka, situated in the central part of the country. This site is situated 148 km east of Colombo and 72 km north of Kandy. It is the largest and best-preserved cave temple complex in Sri Lanka. The rock towers 160 m over the surrounding plains.There are more than 80 documented caves in the surrounding area. Major attractions are spread over 5 caves, which contain statues and paintings. These paintings and statues are related to Lord Buddha and his life. There are total of 153 Buddha statues, 3 statues of Sri Lankan kings and 4 statues of gods and goddesses. The latter include two statues of Hindu gods, the god Vishnu and the god Ganesh. The murals cover an area of 2,100 square meters. Depictions on the walls of the caves include the temptation by the demon Mara, and Buddha's first sermon.

Prehistoric Sri Lankans would have lived in these cave complexes before the arrival of Buddhism in Sri Lanka as there are burial sites with human skeletons about 2700 years old in this area, at Ibbankatuwa near the Dambulla cave complexes. -More 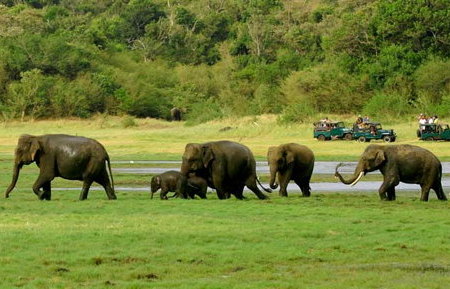 Minneriya National park is one of the only place in the world to witness the largest Asian elephant Gathering known to exist in the planet. Watch as these huge animals drink, play and snack on the green, lush grasses that have been exposed by the receding water. This three hours private jeep safari will be a thrilling experience during your visit to the cultural triangle of Sri Lanka.

2:30pm: You will be taken from your hotel situated in Habarana, Dambulla or Sigiriya.

3pm - 6pm: Enjoy Minneriya National Park by Jeep. The extent of the Minneriya National Park is about 21,000 acres (8,889 hectares). Dry zone plant and animal species are common, and elephants are numerous. Unlike in other national parks, elephants can be spotted at a relatively close range. About 160 species of birds, 9 different types of amphibians, 25 reptiles, 26 fish, and more than 78 butterfly species have been found in this area. There are also rare bamboo trees not found in other national parks. -More 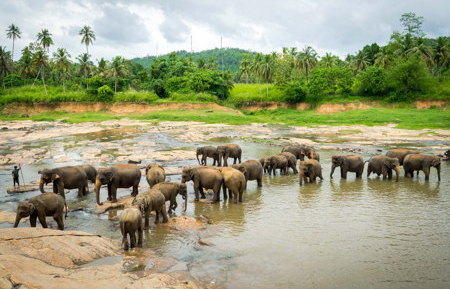 Pinnawala Elephant Orphanage is an orphanage and breeding ground for wild elephants which is situated northwest of the town of Kegalle, Sri Lanka. It was established in 1975 by the Department of Wildlife Conservation on a 25-acre (10 ha) coconut plantation on the Maha Oya river. The orphanage was originally founded in order to afford care and protection to the many orphaned elephants found in the jungle. As of 2008, there were 84 elephants.

The aim of the orphanage is to simulate the natural world. However, there are some exceptions: the elephants are taken to the river twice daily for a bath, and all the babies under three years of age are still bottle fed by the mahouts and volunteers. Each animal is also given around 76 kilograms (170 lb) of green manure a day and around 2 kg (4.4 lb) from a food bag containing rice bran and maize. They get access to water twice a day, from the river.

This elephant orphanage is also a breeding place for elephants. More than twenty-three elephants have been born since 1984, and the orphanage has the largest herd of captive elephants in the world. While most of the elephants are healthy, one is blind, and one, named Sama, has lost her front right leg to a land mine. -More 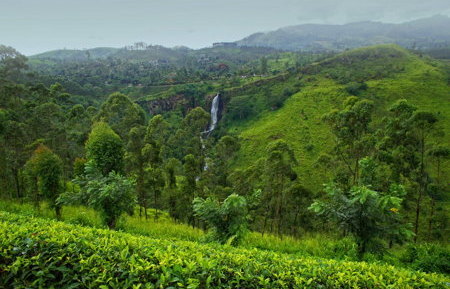 In comparison to other countries Sri Lanka is rich in it's aquatic resources. Most of the waterfalls in the island have been identified by now. Sri Lanka could be considered as the country having the most number of waterfalls. In terms of it's Geographic extent. The destruction of forests have cost a lowering of the rainfalls resulting the drying of natural springs which has become a severe threat to the existence of these waterfalls. By initiating steps to conserve rain forests and keeping the environment clean this valuable asset of nature could be preserved for the next generations. 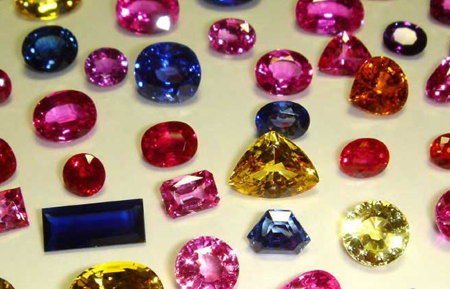 Sri Lanka's gem industry has a very long and colorful history. Sri Lanka was affectionately known as Ratna-Dweepa which means Gem Island. The name is a reflection of its natural wealth. Marco Polo wrote that the island had the best sapphires, topazes, amethysts, and other gems in the world. Ptolemy, the 2nd century astronomer recorded that beryl and sapphire were the mainstay of Sri Lanka's gem industry. Records from sailors that visited the island states that they brought back "jewels of Serendib". Serendib was the ancient name given to the island by middle - eastern and Persian traders that crossed the Indian Ocean to trade gems from Sri Lanka to the East during the 4th and 5th century.

Sri Lanka, geologically speaking is an extremely old country. Ninety percent of the rocks of the island are of Precambrian age, 560 million to 2,400 million years ago. The gems form in sedimentary residual gem deposits, eluvial deposits, metamorphic deposits, skarn and calcium-rich rocks. Other gems are of magmatic origin.

Residual deposits are mainly found in flood plains of rivers and streams. The metamorphic types of gems constitute 90% of the gem deposits in Sri Lanka. Sri Lanka has the highest density of gem deposits compared to its landmass. Ratnapura contains the most gem deposits and derived its name from the gem industry. Ratnapura means "city of gems". -More 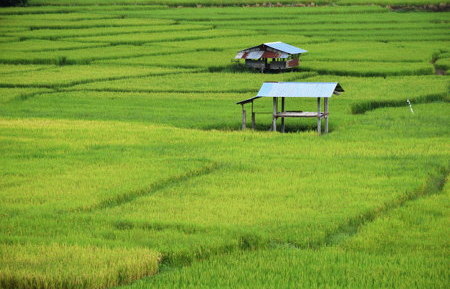 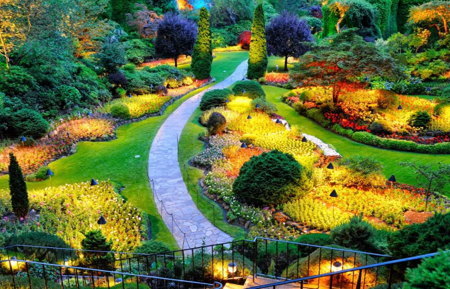 Botanical Garden, Peradeniya is located in close proximity to the city of Kandy in the Central Province of Sri Lanka. It is renowned for its collection of a variety of orchids. It includes more than 300 varieties of orchids, spices, medicinal plants and palms trees. Attached to it is the National Herbarium. The total area of the botanical garden is 147 acres (0.59 km2), at 460 meters above sea level, and with a 200 day annual rain fall. It is managed by the Division of National Botanic Gardens of the Department of Agriculture. -More 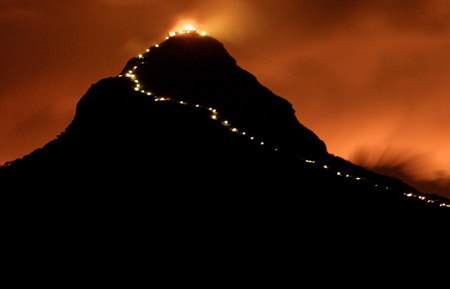 (From December to May). Adam's Peak (Also Adam's Mount; Sinhalese Samanalakanda - "butterfly mountain") is a 2,243 metres (7,359 ft) tall conical mountain located in central Sri Lanka. It is well-known for the Sri Pada "sacred footprint", a 1.8 metres (5 ft 11 in) rock formation near the summit, in Buddhist tradition held to be the footprint of the Buddha. -More